My heart is having a race in competition with my excitement as my plane is on final approach to land on the grass strip in Tawa, Papua New Guinea. Late one evening only five months ago, I was here at this very spot videoing the bioluminescence of a mysterious, rare, and unique flying creature. The weather has been cloudy so I have waited over three days and two aborted attempts for good enough flying conditions for the pilot to safely navigate the plane through the valleys and around mountains to land here.

The bush plane landed, let me off, and was barely out of sight before questions saturated my mind. The most urgent of these troubling questions was, “Why did you pay the girls so much?” I would never have thought that such a trifling matter would weigh so heavily on my mind. Planning for what I was to accomplish in my research here should not have to take a backseat in my thinking for such a minor thing. Please let me explain.

My last trip here was in October 2006. We left the airstrip at Tawa to hike about eight more miles up into the mountains to reach Bainu. Two heavy duffel bags of supplies and equipment were brought to last me through the month I would be conducting research. In this culture the men do not carry things, but that labor is left for the women and young girls. Many times I have seen women loaded down with seventy-five to a hundred pounds of firewood or coconuts as they transport their burden.

On my last time here, I had asked my guide, Joseph, to find people to help carry my bags to Bainu. I was surprised when I realized that Joseph hired two girls about fifteen-years-old to carry the bags. The girls slung those bags around their backs, placed a shoulder strap across their forehead, and were ready to go. Those girls climbed steep, muddy hills with little effort, always waiting for me to catch up with them at the top of each ridge. They giggled each time I approached the top and needed to pause and rest while they easily traversed the top and started on down. (I can see the humor in this even today.)

Kids playing around my site at the “high garden”

After an eight-hour hike, I paid them fifty Kina, equivalent to about twenty US dollars, which I thought was a fair price for carrying the duffel bags. No! Little did I know about the going wages in the area. I later discovered that I had paid them about a week’s wages for one day’s work. Because the girls had received so much money, their “wantoks” (relatives) came by for their share of the profits. In the end, the girls received almost nothing after the relatives claimed their share. In this culture, if a relative asks another relative for anything, that relative who is asked must give if within their power to do so. If relatives want to room in your hut, you will let them live in your hut until they decide to leave. It works for them, but I could see many problems arising from such arrangements.

I have seen women carry amazing loads for considerable distances and not seem fazed by the effort. I remember while on Umboi Island, Mark Kau’s wife, Deliah, was carrying about forty-five pounds of coconuts to sell at Bunsil Station. When Deliah realized that the person carrying my heavy bag had gotten tired, she took the bag’s shoulder strap by one hand, swung the bag up on the top of her load, and kept walking and talking for another five miles. It is really amazing to see the strength and endurance of these women who are tempered by the constant, hard work they do daily.

It took only four hours to arrive at the high garden site on this trip, cutting my time from the first trip almost in half. On this trip I gave money to Joseph to pay a fair wage, so the girls were happy and able to keep and spend all they earned at the “general Store.” A hard lesson was learned by me. I discovered that a fair wage is three Kina, about 96 cents in US money, for those two girls to carry the heavy duffel bags for eight miles up and down the mountain ridges.

Finally the end of my hike for today

Now I am back at my “high garden” site. The tent is pitched and a sunshade is placed over the tent since I have to sleep during the day and stay awake at night. Let me regress for a moment and recall what happened the last time I set up my tent on this spot.

Even though we are close to seven thousand feet above sea level, days this close to the equator are very intense and hot. The nights cool off nicely and make for a comfortable time to watch and do research. One afternoon, I was trying to get to sleep and sweating profusely in the unbearable heat. All of a sudden it became darker in the tent due to a shade cloth being thrown over the top of the tent. I looked outside and saw Zion and six local natives around the tent, staking down the shade cloth so it would not touch the tent or blow away. The inside of my tent was made considerably cooler by the nice shade they provided. This unexpected deed of kindness allowed me to sleep for the entire time I was there without sweating during the heat of the day. This was one memorable act of kindness the local natives showed me while I was with them. Many other times they brought food from the garden and also delivered fresh water to me. 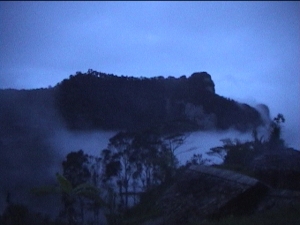 Mt.Hamiya Coming out of the mist

The first night I eagerly sat and watched intently all night long although my diligence was not rewarded at all. Nothing of interest happened, nothing at all. In fact, during the entire three weeks I spent watching the night skies, I saw no bioluminescence of any kind. The Indava creature must have moved out of this area for some reason. October is springtime in Papua New Guinea. If this creature had young to care for and feed, I should have seen more activity during those fruitless nights. I surmised that if the young were five-months-old or older, perhaps the creatures moved on to other territories and would again return to this region in the springtime.

I have not had enough time in the bush to be able to educate myself about the comings and goings of the flying creatures. I do not yet have an explanation for why their bioluminescence was hidden from me on this trip. Only spending much more time, diligence, and research in this remote and dangerous part of the world will shed more light on the activities of these enigmatic night fliers of Papua New Guinea.