The overwhelming stench of humanity is the first to reach your nostrils. Not being used to tropical heat and humidity, the strong smell of decomposing waste insults the nostrils almost anywhere one goes. Much of the odor is from organic waste that is decaying. This natural process is one that we who live in drier climates do not experience very often. The public toilets at the airport in Port Moresby, were just open holes in the concrete floor. For a greenhorn, the smells were very impressionable on my first time to leave the States and experience a foreign country. Combine this with all the unwashed humanity crowding together in the airport, and I was totally immersed in this moment’s experience.

Everything reminded me of what a 1940s airport in the States was probably like. Simple and straight forward. Long before the days of security and regulations. We, a group of five from the States, have a thousand pounds of gear and equipment to move from the international gates to the domestic gates before we can continue our flight deeper into the land of Papua New Guinea. Our group is lead by Carl Baugh and includes Koby Brown, M.E. Clark, Robert Summers, and me, Paul Nation.

I had been asked to come and be “veterinarian support.” At this time in my life I was raising ostriches and emus, both large flightless birds of the ratite family. I could go into a pasture, catch and load a 300-pound male ostrich, incubate eggs, and raise the chicks. This experience should come in handy if we should encounter our objective, a large flying creature that we know little about.

Several hours later we were landing on the island of Umboi in a Twin Islander aircraft. It would take two trips from Lae to Umboi Island to bring all our group and equipment. We grew to eight people once we arrived. In Lae, we connected with Jim Blume, a missionary bush pilot, who has lived in Papua New Guinea since 1969, a national from Lae named Paul for our translator, and also a government representative named Sam who would also translate for us.

In 1994, a Malaysian lumber company had paid for the lumber rights to much of the timber on the island. Because the lumber vehicles needed an adequate road for use in their work, this helped in our being able to travel about the island where the research took us. The road was a dirt track that made a ring around most of the island. Although the road was accessible, the problem remained of our being able to find a vehicle that was sufficient to take us and all our gear and equipment close to the research area. We finally found a small Toyota-type truck available for the day, so we loaded up everything and everyone and traveled as far as we could on the road before we had to stop. We could not carry all the gear by ourselves so we split the team into two groups. We rented a banana boat and loaded all the gear and one group onto the boat which then traveled around the island to link up with the other group. To reach our rendezvous point, some of us had to hike several hours to get back together with the banana boat, our equipment, and the ones who stayed on the boat.

Afterwards, we spent our first night in Gomlongong Village. It was on the jungle bush track, or trail, or path, while traveling to Gomlongong Village that I first heard of the bioluminescence  from this creature. The purpose of this expedition was to look for the creature called “ropen” by the locals. Judging by what the eyewitnesses said they had seen in the daylight, their descriptions of the ropen exactly fit what we know to be a pterosaur, a supposedly extinct flying reptile. As we walked the jungle track, we would encounter small clusters of huts off the trail. When occasionally stopping and allowing our translators to talk with the natives about what we were looking for and our purpose for being on the track, we would hear stories about this creature.

It was in a small four- or five-hut clearing that we first heard a report of the creatures being able to generate a bioluminescence on their own. We left the clearing and chuckled about the ridiculous claim that it “has fire when it flies, a yellow fire.” However, this report of an amazing characteristic of bioluminescence, continued throughout all the eyewitnesses’ reports who saw it at night, regardless of which language group they were part of or whether they lived on the island or the mainland. At Gomlongong Village, we were told about a cave on top of Mt. Bel in which this creature lives.

After paying for the rights to climb and do research on Mt. Bel, we spent a week high up in a cloud cover, camping and watching, while searching for the elusive cave. We had nothing to show for the seven days of effort expended on Mt. Bel. No cave was found. Nothing, only clouds, rain, and mist for a week. 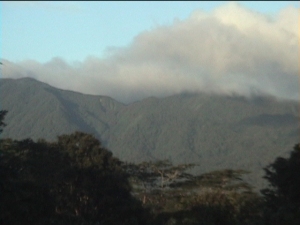 Mt. Bel,the top covered in clouds, like the week we spent up on top

Many years later I remembered an event that puzzled us for a while on the top of Mt. Bel. The very top of the mountain was treeless and covered in tall grasses. Tall trees do not grow beyond about 100 feet below the top of the mountain. This left the top of the mountain mostly flat and covered with grass that is three to four feet tall. While searching around the top, we came upon a “bed” in the grass where something very large had settled and packed the grass down in an area of about four to five feet across. What could do this?​ At the time we considered that perhaps a large python snake had coiled and made a bed there. No other animal we knew about in the area could have made such an impression in the grass. This discovery was on one of the first days up on the top. Now after spending a week in the weather and climate, I now know that no cold-blooded animal would have been able to survive at that altitude and temperature. The temperature would drop into the lower fifties and be wet and cold enough that any cold-blooded animal would definitely live at a lower and warmer altitude. Could this bed have been made by a flying creature that used the top of Mt. Bel as a resting spot? 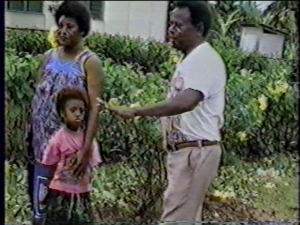 When we interviewed people, most spoke of seeing the “glow” fly from the ocean to Mt. Bel or from Mt. Bel to the ocean. We traveled back to Lablab Mission where the ferryboat would come once a week and take people and supplies to and from the city of Lae. We had a couple of days to spend before the ferry arrived, so news of our inquiry had spread. We spoke with a lady high school teacher who told us about her seeing the bioluminescence in 1993. She was at a funeral in a village on the northeast side of the island, an area we had not investigated. About 2:00 AM during the night of the wake, a glowing creature came flying in from the ocean. The glow was red, red like the red hot rocks they cook with. The people all screamed and yelled and the creature flew over the group and into the mangrove swamp just behind the village. The “glow” was able to be seen for several minutes after the creature landed in the mangrove swamp. 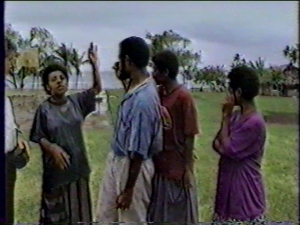 A group of  high school girls spoke with us about their experience of seeing a similar bird “glowing” and flying in from the ocean while they played basketball late one night. As the creature got close to the basketball court’s lights, the “glow” stopped. The creature circled the court twice, then flew off toward the interior toward Mt. Bel, and as it left the area the girls saw the “glow” reappear.

Before arriving on Umboi Island, I really did not know what to believe about this creature. However, now after seeing and hearing from so many people with their descriptions of this unique creature, I am convinced that they are really seeing a living, flying animal of a unique type that can produce its own bioluminescence.

What type of flying creature is this that needs to be scientifically analyzed and documented? I must continue this important research to help solve this mystery. 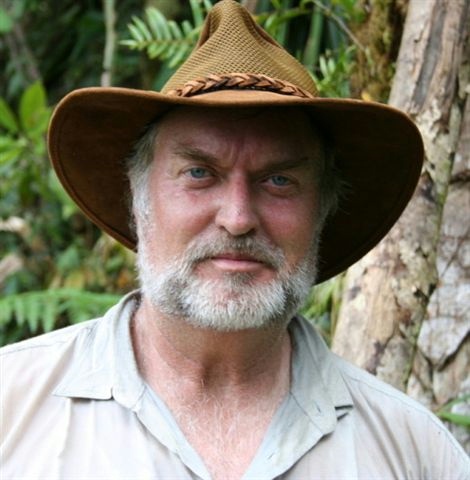